We Answer Your Most Frequently Asked Questions About Dementia

Most people may see dementia as a tragic, yet inevitable part of the natural aging process.

Most people are wrong.

While dementia is more common among seniors, it’s not a normal part of aging. In fact, there are many people who are in their 80s and 90s who have very little memory loss or memory issues at all.

We understand the importance of memory care and providing safe, stimulating activities for those who have Alzheimer’s and other dementias.

We know you have questions about dementia, so we’ve compiled a list of some of the most common ones we’ve received.

What’s the Difference Between Dementia and Alzheimer’s?

Actually, this is where a lot of people get confused. Dementia is an umbrella term that comprises several different types of diseases that can affect brain function and memory.

However, in both cases, those who have dementia may benefit from assistance in dementia care facilities.

Is There a Cure for Dementia?

No, but there are steps you can take to reduce the chances that you’ll develop it. This includes eating a healthy diet, getting plenty of exercise and stimulating your mind.

Once diagnosed with dementia, there is no cure, but working closely with medical professionals can help stabilize the situation.

While not necessarily common, it is possible for younger people to have early or younger onset dementia, which can occur in the 40s and 50s.

While there are still studies ongoing as to how much family history and genetics play a role, early onset dementia is also seen in those who have other diseases such as Parkinson’s, multiple sclerosis, Huntington’s disease or HIV.

What’s the Difference Between Dementia and Forgetfulness?

This is one of the most common questions we receive. (You can read more about it in our popular blog post How Do You Tell the Difference Between Dementia and Forgetfulness?)

Essentially, dementia involves much more than forgetting where you put your keys. It deals with forgetting names and places that should be very familiar to you.

How Does the Disease Progress?

This is difficult to answer because the disease will progress different ways in different people. For some, it may be relatively mild, focusing on memory issues, while with others it may more quickly progress to difficulty with fine motor tasks.

What Are the Main Symptoms of Dementia?

Memory loss is the first and most obvious symptom of dementia. However, it’s important to distinguish the difference between short-term and long-term memory loss.

Typically, long-term memory will remain intact. Your loved one will be able to tell you about an event that happened a long time ago. However, they will have trouble with short term memory, such as recalling recent activities.

Mood changes often occur. In some cases, those with dementia may even become aggressive.

It’s also not unusual for them to have problems with communication; names of everyday objects and the ability to describe things may be impaired.

What Are Memory Care Facilities?

Memory care is a special type of assisted living that helps those who have Alzheimer’s or other dementias. For example, at West Bladen, we have 26 secured beds dedicated to helping those who have these devastating diseases.

We offer care that provides an environment that is safe and stimulating. Our employees have specialized training that gives them a unique perspective and the ability to help those with dementia.

By helping your loved one, we allow you to step back into your role as son, daughter or spouse.

Are There Dementia Care Facilities Near Me?

Yes! At West Bladen in Bladenboro, NC, we pride ourselves in creating a relaxing, restful environment in a place that residents love to call home. We’re also just a short drive from some of the most beautiful beaches on the East Coast.

Getting started is simple. Contact us for more information or to schedule a virtual tour. We look forward to the opportunity to serve the one you love. 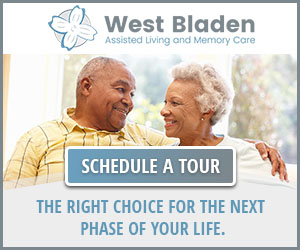